OCast alcana, alfeña, Hisp Ar. alhínna, L. Lawsonia intermis, L. alba, Ar. hennā‘, hínna, Heb. chana, Eng. henna, alcanna. It is a shrub from which a green powder is extracted from leaves and dissolved in water to dye hair or skin a reddish orange color. It represented fire and the blood of the earth. Egyptians dyed mummies with henna. The Bible mentions henna in Song of Sol. 1:14 and 4:12-13. In Yemen, Jews smeared the bride’s body with henna dye. A person paid for the privilege to do this by giving the couple a present. From there came the expression “henna night” instead of wedding night. This custom is still exists in some parts of Israel. Jews also used henna to combat urinary infections. Muslims introduced henna to Spain. When Ziryab, the famous Kurd musician, arrived Cordova from Baghdad in 822, his beard was dyed with henna as Arabs throughout the Middle East. This was first sign of how he would change the styles and manners in the emir’s dining rooms. As dying hair with henna became the rage for both men and women, he left specific instructions on how to do it. Still today henna is known as “Ziryab’s dye.” It has been used to dye fabrics. Arabs found it useful medicine. Ibn Massouih used it to minimize the effects of smallpox. It also relieved nervous complaints, leper and tuberculosis. African Muslims apply the oil from the flower as perfume. A street, in the Jewish market of Toledo, Spain, was named Alcana and another in the town of Elche, Alicante continue to be called this. See aligustre. [Baena/Dutton. 1993:305:544:v202; ES: “Abderrahman.” Nov 6, 05; Stuart. 1987:212; and Usher. 1974:346-347]

L. Peganum harmala, Ar hârmel, Fr. harmale, pégane harmale, rue sauvage, Eng. harmal, Syrian rue. It grows around the Mediterranean from Syria to northern Africa and from Greece to Spain. This is a shrub, one to two hands high. The white flowers begin to appear in April in Andalusia and a little later at the basin of the Ebro River and on riverbanks in central Spain and continue to bloom throughout the summer. The angular seeds are extracted from the capsule in late summer. It has been known from ancient times. Arabs especially ate the seeds to become happily inebriated. Arabs planted it in Granada to treat dysentery. They have been employed for lethargic encephalitis (sleeping sickness, brain inflammations caused by a virus), tapeworms and parasitic worms, in general, as it is an anthelmintic medication. The seed contains psychoactive beta-Carboline alkaloids, the most important are harmaline, a white crystalline alkaloid, and harmine, another alkaloid. These are extracted for narcotic use. Until recently, a special wine was made in Castile by macerating harmal seeds in ordinary wine. It was used to fight off depression.
It is said that there are few bald Moroccans as harmine is an ingredient in a shampoo preventing this. Moroccans also boiled the seed, mixed with lemon juice and water and then sun dried the mixture, which resulted in a paste that is smoked with tobacco to excite sexual desire and to become extremely sensitive. Witches used it along with humans to ward off evil spirits and people used it to protect themselves from those who speak badly about others. This plant , today, is not recommended for use. [ES: “Alharma.” Feb 7, 05; ES: “Diccionario licencioso.” Aug 6, 04; and Fericgla. Nov 10, 02]
Posted by Suey at 9:53 AM 0 comments


L. Catania siliqua, Ar. al jarröda, Fr. caroubier commun, Eng. carob, carob bean, carob tree, St.John’s bread. It is known that this tree is a native the eastern Mediterranean. It is claimed to be Moroccan, but also it could be a native of Spain, as it has grown on the peninsula from time immemorial. It is common on the coast in the provinces of Alicante, Valencia, Tarragona, Barcelona and Gerona. The bark is an astringent. The tree bears red flowers followed by flat leathery horn shaped pods, 3-12” long containing hard brown seeds embedded in sweet edible pulp. The seeds, equal in size, were used as weights from which "carat" is derived. This fruit is consumed for its laxative effect. Dioscorides recommended it for this. Actually, the seeds produce an abundance of mucilage, a gum used as a laxative in pharmaceutical preparations and as an adhesive. It is mentioned in Matthew 3:4 and Mark 1:6 of the Bible, which relates that John the Baptist subsisted on the pods while in the wilderness (therefore the flour is called “St .John’s bread”). Carob trees were growing on the banks of the Jordan River. Christians traditionally make the bread on June 24th, the saint's birthday. Muslims drink the juice from the fruit during Ramadan and Jews eat the fruit on Tu Bishval, the New Year for Trees. In the Middle Ages it came to be synonymous with protection and health. Formerly, it was laid out in lines to catch birds. Today it is a substitute for chocolate. See yero. [ES: Herbs. Oct 8, 02; and Gázquez. Cocina. 2002:248]


CAROB MUFFIN RECIPE FROM THE ARCHIVES OF THE MEDIEVAL SPANISH CHEF

Spread batter evenly in a greased and floured 9 x 13 inch pan. Bake at 350 degrees for 20-25 minutes or until a knife inserted comes out clean. Cool.

OCast Leon arganzas, argenzos, Hisp Ar. alẖurǧ, Ar. ẖurǧ, Eng 1. saddlebags, knap sack, small sack opened in the center and closed at the ends, which form two big handles. Normally they are square. In this way the weight is evenly distributed. They are used to carry items from one place to another. 2. food provisions needed during a trip. 3. guanciale, pork jowls, pig cheek, bacon from the jawbone. Today, this is considered exquisite pork fat. It is said that the custom of treating it as a delicacy originating from Jewish and Moorish converts’ forced to consume it. [ES: Decaer. “SC.” Mar 15, 99; ES: Martínez Rodríguez. Nov 3, 01; ES: Shamsuddín. “Gastronomía.” Sep 21, 01; Pers. Memories. Slaughters Mostoles. 2000:2001:2003; and Sánchez Albornoz. 2000:116:188] 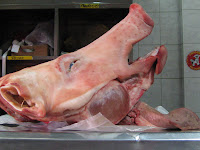