JUNCIA OLOROSA WITH TUNA FISH CASSEROLE FROM THE 15TH CENTURY

Avenzoar recommended a gargle containing of it after cleaning the teeth. Anon Al-Andalus and Nola used it as seasoning. Galyntyne, a galingale sauce, was made to accompany meat fowl or fish and served at the coronation banquets of Richard II and at that of Henry IV of England when it was served over pork fillets.


Cut bonito into pieces the size of three fingers. Smear a casserole dish with olive oil and add the fish.

Grind the spices and mix them well. Springle the bonito with them. Chop the herbs and mix those and sprinkle them on top of the bonito.

Pour the verjuice and orange juice over the bonito and roast it in the oven for 20 minutes. 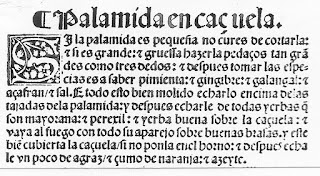 JUNCAL, A THREAT TO FARM LANDS AND MACHINERY

ajonjera, achicoria dulce, L. Chondrilla juncea, Eng. rush skeletonweed, gum succory. It is a member of the chicory tribe of the sunflower family and a close relative of chicory and the dandelion as it too has a spindly habit of growth.

It thrives on sandy dry soils in France, Italy and Spain. The plant lives two years and grows from one to four feet high. Its taproot may grow to seven feet or more in length. When cut, the stems and root exude white latex sap. The yellow flower heads, appearing in summer, are ½” in diameter. They grow at branch tips, leaf axils and along the stem in clusters of two to five or individually. One plant can produce 1,500 flowers and 20,000 seeds.

Sheep particularly like to graze on the rosettes and early flowers, while cattle munch on the stems of early flowers. In the Spain during the Middle Ages, the whole plant was taken to the kitchen. Although a little bitter, the greens were eaten like salads dressed with oil. The rosettes were added for color. The sweet roots were cleaned and fried a little.

Medicinally the stems and roots were ground with myrrh and administered to women in the form of oil to bring on menstruation. The roots were mashed and mixed with honey and made into round pills, which were dissolved in water and mixed with nitre to remove scales on skin. Hair was treated with the juice extracted from the tender roots. A needle was dipped into the juice and that was dropped on the roots of the hair to prevent lose.

Avenzoar directs that moderately heated, it has drying powers that act as a stomach and liver tonic, at the same time it improves the strength in both viscera and is useful to alleviate dropsy. Drunk like wine, it was useful for snakebites. Boiled juice was drunk alone or with wine to constipate the bowls.

Today, it is considered a threat to farm lands as it reduces forage production, lowers the productivity of land and reduces crop production 50-70% and the entwined plant and latex sap gum up farm machinery.

JUNGLADA WITH RABBIT POTTAGE FROM THE 15TH CENTURY

Clean the rabbit well and scald it for a few minutes in boiling water then cut into pieces and salt it. Grease it with lard and put it in the oven with the lard and roast it slowly for about 30 minutes until half done.

Peel the almonds. Toast them. Chop them. Slice the bread and soak it in white vinegar. Mash this with the almonds, the rest of the onions chopped and the livers (roasted a little beforehand). Beat eggs and add them to the mixture, stirring constantly until the sauce thickens.

When the rabbit is almost done. Strain the broth and add this mixture to the meat. At the end of cooking add the honey or sugar if a sweet and sour flavor is desired. Serve in soup bowls. Sprinkle with ginger shavings and cinnamon. It is truly delicious!

judihuelos,OCast fasoles,  fréjoles frisoles, And frijón, Ast frixól, Sev frijoles, Ar. lūbiya, MEng benes, Eng. bean as fava beans which float when emerged in water as opposed to chickpeas that sink. Some thought they were named after the Jews as they refused to be baptized. Further, beans imply the rare yellow color (like a broad bean) like the clothing that Jews were forced to wear after 1391 as dictated by Castillan law.

Recipes from Al-Andulus may call for the mung bean (Paseolus aureaus), cow pea (Vigna unguiculata) originating from India or pulse (peas, fava beans [Vicia faba] and lentils), while recipes from northern Spain usually call for fava beans. It should be noted that Medieval recipes cannot include green beans, L. Paseolus vulgaris, as they were unheard of until brought from the American continent after the Middle Ages.

The mung bean, as well as the others, mentioned above originated, however, in Africa or Asia long before that time and these were introduced to Al-Andalus by the Arabs if not before. Fasoless, of African origin, are a variety of frijoles (Vigna sinensis). They are thought to be an ancestor of the black-eyed bean. Frisoles, also called judihuelos, now known as frijoles, were cultivated in Greece since ancient times. The Romans called them phaseolus as they are thought to have originated on the Island of Pasellus. Dioscorides wrote of them as ‘Turkish white beans’. Fadalat gives a recipe for pureed fava beans with lamb. The Anon Al-Andalus gives instructions for making fresh beans with meat. Nola has a recipe for “Royal Fava Beans”.

Rinse peeled beans and soak them in water with soda for 2 hrs. Rinse and put them in a pot with warm water and bring to a boil. Remove from heat and strain. Put the beans in a food processor and grind them. Add almond milk or goat milk and blend. Pour this into a pot. Add the remaining ingredients and heat stirring constantly until the mixture becomes a purée.

This can be served as a breakfast porridge or like mash potatoes to accompany meat or fish.