He was a physician who was born in Segovia. His father was a converted Jewish doctor. Andrés Laguna studied at the University of Salamanca for two years and then went to Paris where he became so fluent in Greek and Latin that he read Dioscorides in the original language. In 1530 he graduated in fine arts and medicine in Paris, returning to the Spain in 1536 where he taught at the University of Alcalá.

He traveled to England, lived for a while in Holland, collecting herbs to verify Dioscorides prescriptions.  From 1540-1545, he resided in Metz, Germany. There he was hired as a physician of the city. From 1545-1554 he lived in Rome where he received various honors from Popes Peter III and Julius III. He spent time in the home of Ambassador Diego Hurtado de Mendoza, in Venice, who was a known humanist and owned of one of the best libraries in Europe of his time. After living in Holland again for three years, Laguna returned to Spain where he created the Botanical Garden of Aranjuez. It is thought that he died in Guadalajara in 1559. He is buried in the church of San Miguel, in Segovia.

Laguna published various works on medicine, among other subjects, including commentaries on Medical Materia by Dioscorides after testing herbal descriptions and therapeutic properties of the latter in Europe and on the Mediterranean coast. It proved to be a valuable work through the end of the 18th C. Laguna continued the theory of the four elements but refused to accept witchcraft or quacks. See col forrajera. [Castro. Alimentación.1996:242; ES: Fresquet. “Andrés.” Mar 25, 02]

Put the spices in a bag. Put this in a pot with sugar and rosewater. Dissolve the saffron with a little rosewater and add it to the pot.

Bring to a boil. Boil gently until the sugar has dissolved and a syrup is formed. Remove from heat. Grind the spices in the spice bag. Add 1 tsp or more, according to taste, of the spices to the syrup and set aside.

Wash an aloe leaf. Cut off both ends. Remove spine on both sides and put the leave in water for 5 minutes to help eliminate the yellow sap from the gel inside the leaf.

Remove the leaf from water, Take a blunt knife and remove the green outer coat of the leaf. Dip the leaf in pitcher with clean water to remove as much sap as possible.

Put the aloe in a blender with the syrup. Turn the blender on low for 5 seconds and then high for 5 seconds. Drink 2 tbsp of the liquid mixed with 1/4 c hot water.

The benefits: it fortifies the stomach, liver and other organs; it cheers the heart and tempers the complexion and is beneficial in the beginning stages of dropsy.

Although the recipe is much older than Laguna, this is the type of recipe he could have prescribed.


[1] Musk was not used as it was not available. Further, it is very expensive.

Boil peeled almonds in the wine. Strain the almonds and grind them in a food processor. Return them to the pot with the wine. Add quinces. Place spices in a bag and add them. Add sugar. Cover and cook until the quinces are soft. Remove them and peel them. Remove the core.

Put the quinces in a food processor and mash them. Return them to the pot and cook 5 more minutes.  Taste for sweetness. Add more sugar if necessary. Cook until the sugar is dissolved. Put the sauce in a dish and garnish with sugar and ground cinnamon and cloves. 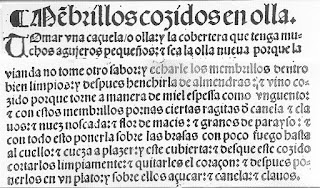 LAGANE WITH RECIPE FOR LAGANE AND CECI

lagane. They were first recorded in Italy between 65 BC-8 BC as a frugal supper with chickpeas and leaks. It is thought to be the forerunner of lasagna, tagliate and/or fettuccine. They are thin strips of pasta originally made with semolina, spelt or farina and water. The ancient shape is unknown. They could have been in the shape of a pancake or a flat cake. It has been documented that Etruscans did not boil them. Perhaps they were covered and cooked over coals or fried.

Authors like Grainger and Kelly claim Apicius provides layered recipes consisting of alternating meat or fish with "oil cake" which they seem to translate as lagane. They claim that he does not give a recipe for lagane, which leads one to believe that this was common fare.

The North Africans are believed to have brought it to Al-Andalus between the 11th-13th C. Its existence in Granada is confirmed in manuscripts found in the Alhambra. The Muslims in Al-Andalus were the first to record boiling them. After boiling in fatty broth, they can be seasoned with cheese, saffron, pepper and cinnamon. It is very soft pasta good for people in the Middle Ages who had teeth problems.

Modern lagane, in central and southern, Italy is like wide tagliatella. They are made with durum wheat or fine wheat flour, water and salt.  It was and continues to be a very popular dish accompanied by chickpeas in southern Italy in particular. It is a versatile dish appropriate for vegetarians as no eggs are used to make the pasta and cheese is optional. Although not common, meat or shellfish can be welcome additions.

Wash chickpeas and soak them in water overnight. The following day, strain the chickpeas and rinse them. Put them in a large pot. Cover with plenty of water. Add the bay leaf and bring to a boil. Reduce heat and gently boil until tender. The time depends on the age of the chickpea. One and a half hours is average cooking time.

When tender add 1 tbsp olive oil and salt to taste. Remove from heat and strain, reserving the broth.

Chop the onion and sautée it for a few minutes. Add garlic sliced. When the onion is translucent add the rosemary and half the chickpeas and sautée until toasted. Add wine and parsley leaves chopped.

Mix the salt and the water. Add the flour. Roll it into a ball.

Lightly flour a smooth surface. Knead the pasta for about 10 minutes until smooth.

Roll it into a ball and cover it with a cloth or plastic. Place it in a dark spot and leave it for ½ hour.

Divide the dough into 4 parts. If a pasta machine is available, run the dough through the fettuccine setting several times on the thick setting.

If a pasta machine is not available, roll each portion out on a floured surface and cut strips wider than fettuccine and narrower than lasagna and thicker than both. Strips can be between ¼”- 1” wide and 2”-4” in length.

Bring the broth from boiling the chickpeas to a brisk boil and add the lagane. Continue to boil for 3-9 minutes, as per the thickness until the pasta is al diente.

Strain off the broth, reserving it. Add the ½ c of the broth to the sauce. Add the pasta. Mix well and remove from heat.

Grate the cheese if using it and add ¾ of it to the mixture. Reserve the remaining cheese for eaters to sprinkle on the dish when served.


Serve piping hot with a small of grated cheese on the side.
Posted by Suey at 8:00 AM 0 comments

LACÓN (Gal) WITH RECIPE FOR SHOULDER OF PORK WITH TURNIP LEAVES

It is the only cocido that does not contain dried beans. Traditionally, it was a Gallegan winter dish. Pilgrims on the way to St. James frequently ate it.

Place all the ingredients in a large pot. Cover with water and marinate during 48 hours.

Remove the meat from the pot. Cover with clean water and bring to a boil. Lower heat and boil gently for 1 hr. Turn off the heat, leaving the pork on the burner.

Put the sausages in a separate pot. Remove just enough broth from the pork to cover the sausage. Bring to a boil. Reduce heat and boil gently for about ½ hr until sausages are done.

Remove the shoulder from the broth and separate the meat from the bone. Slice the meat ¼” thick. Do the same with the sausages. Place all the meat on a platter.

Remove the turnip leaves from the broth and put it in a separate serving dish.

[1] Today, potatoes are included and they are cooked with the sausage.
[2] If not available use 1 head of cabbage and add 1 tsp white vinegar.

LABIADAS WITH HONEYED RICE RECIPE FROM THE 13TH CENTURY

1. labiates, petals or sepals projecting like lips of a flower where the bee enters to collect nectar. Members of the labiate family include snapdragons, catnip and sage. 2. labiate nectar. [Silva. 1994:176]

Soak rice over night in enough water to cover it. Strain and was the rice. Put it in pot and add 2 c milk or water. Bring to a boil. Reduce heat and simmer for about 20 minutes.

Place honey in a saucepan. Bring to a boil and simmer. Skim it. Add the honey to the rice. Continue to simmer until the mixture coagulaes and becomes a paste.

Pout the mixture into a serving bowls and macerate it with a spoon. Make a hole in the center and pour melted butter into it.

Sprinkle with sugar and cinnamon. Serve it warm. 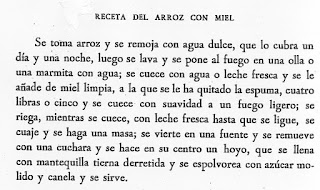