LECHUGA WITH A 13TH CENTURY RECIPE OF LETTUCE WITH LAMB

L. Lactuca, Eng. lettuce. It is believed that lettuce descended from a Siberian variety of wild lettuce that acted like opium by relaxing the consumer and making him sleepy. The Romans used it especially for celebrations for its laxative effects and it served as a tranquilizer or for its anti-aphrodisiac effect.

During the Middle Ages, the use of lettuce fell dramatically in Al-Andulus, although it continued to be used in the Barbary Region of North Africa. It was considered humid and cold. It was thought to generate an extraordinary subtle blood and was beneficial against itching produced by the combustion of the humors. Lettuce was washed and left to soak until it appeared wilted and then eaten. Pliny states that it was the symbol for continence as it contained properties that calmed lust.

For Jews, it was the symbol of the coming of spring. It meant perpetual renewal of life and everlasting hope for human redemption. Medieval Jews in Spain mention it as a salad variant for greens but it was not a necessary ingredient except during Passover when a special salad was served. As lettuce is bitter it is prepared in memory of the bitterness of the Jewish slaves of the Egyptians. [Covarrubias; 1998:756:35a; Font. Plantas. 1999:629:971-873; Ibn Zuhr/García Sánchez. 1992:83:96; ES: “Passover.” May 11, 04; Villena/Calero. 2002:23a; and Villena/Navarro. 1879:44]

Chop lamb into small pices. Put it in a pot. Add salt to paste with a pice of onion, onion, pepper, coriander seed, clove, saffron and oil. Cook until almost done. Add heads of lettuce, peeled and cut up. When the lettuce is done, add vinegar and finish cooking. Cover with beaten egg, mixed with saffron and spikenard. Cover and remove from heat.  Let sit until eggs have solidified.

LECHON, -A, WITH A NEW WAY OF ROASTING LAMB

Cat porcell, Eng sucking piglet, lamb or other breast feeding animal. The sucking pig is always roasted. Villena thought it was better stuffed. He explains that after baking the skin is removed first by sliding the knife under it at the back of the ear and down the body on one side and then the next. The tail is cut off at this time and chopped into small pieces. The head is cut in two and the snout is set aside. He does not recommend eating the brain. The trotters are chopped off the legs. The body is opened and the stuffing removed. The lean meat is sliced with the fat and cut into small pieces on the cutting board. The bones are served with it if tender. See cerdo. [Anón/Grewe. 1979: XX: I74-75:XXXXI:84-85:Gázquez. Cocina. 2002:141-143; Ruiz/Brey. 1965:1084-1085and Villena/Calero. 2002:22b:36a]

Step 1:
Clean a plump sucking lamb leaving a narrow opening. Cut the meat from another lamb into small pieces. Put all into a pot with the remaining ingredients for step 1. Put it over moderate heat until done, about ½ hour.


[1] As the recipe was made for 4 persons only the ribs from one side of a lamb were used with 1 lb meat from another lamb. 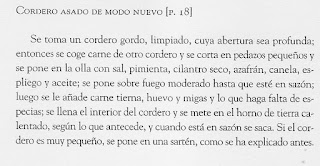 Ar. haleeb, Eng. milk and its products. Since ancient times milk has been an indispensable product; it is found in various forms including ewe, goat and rabbit’s milk in Mediterranean regions. Cow’s milk was not recommended there as in northern areas because cows in the Middle Ages were much smaller and less developed than today as their milk yield was not as great.

Avenzoar stated that it was cow's milk was less dangerous than ewe’s milk although not recommendable. It has been discovered recently that they produce more milk if they listen to music. Pilgrims, today, on the Way of St. James in Galicia, should not be surprised if they see cows wearing headsets.

Avenzoar thought camel’s milk invigorated the stomach and the liver. It has the advantage that it is difficult to curdle. Curdled milk, according to Avenzoar, is cold and humid; it loosens the stomach and alters the nerves and the brain.

Avenzoar described cream cheese as humid and cold and it generates heavy humors. Once it is digested it is an excellent food and it was believed to cure wounds. Milk was preserved in salt to create cottage cheese, white cheese or “hilat”, when a sourer substance that was added to fritters. It was Little Miss. Muffett’s curds and whey.

Avenzoar maintained that it has the power of cooling and hydrating the most weak. It is harmful for the brain and nerves. Avenzoar thought butter cold and humid and it elevates pain from burns. It is used in dishes to diminish the humidly and with heat and salt gains a little warmth.

Clarified butter was held in high regard in England and some regions in Spain. Avenzoar claimed that cured cheese was dangerous and putrid, and as it re-dried it spoiled the food. He continues by stating that cured cheese extracts in the same was as oleaginous products like olive oil. It is hot and dry. It was beneficial against warts. Whey, Avenzoar adds, did not cool much; if the yellow water is drunk it will act like a laxative. [Benavides-Barajas. Nueva-Clásica. 1995:114; Ibn Zuhr/García Sánchez. 1992:61-62; and Pers. Memories. Way of St. James. 2002]

Crumble clean cream cheese into a pot. Mix it with take chopped cilantro and onion, stir and add chopped oregano and thyme. Add pepper. Stir in two spoons of oil and an equal quantity of water and salt to taste. Heat until cooked. Remove the pot from heat. Cover with slightly beaten eggs mixed with flour.