Hares have been hunted as long as they have existed in Spain and England. They did not arrive in England until the Normans brought them, i.e. after 1066 but were in Spain long before that.

In Al-Andalus, it was thought that adult hares had meat producing slow digestion. It was consumed to dissolve calcifications. For this it was advisable to eat them. The head of the hare was cooked to use as broth in Arab soups or stews (tafayas), which were believed to be reconstituting and useful for those who suffered convulsions. Hare blood was applied to the face to remove freckles and old age spots. Laza claims that rabbit grease was used to relieve earaches and distilled water from baby rabbits restored hearing and took away the buzzing sound. Avenzoar continued that the left paw of hares possess the peculiarity that if hung on a woman’s thigh during sex she will become pregnant; nevertheless to produce this effect another paw should be hung on the girdle of the man.

Villena stated that they were boiled or roasted whole and explaineed how to carve them. Ibn Razīn boiled his in spices and herbs and then browned them in the oven. Other Spanish rabbits were marinated in various sauces, included in capírotadas, gazpachos and lebratos.

Laza claims that Spain was overrun with rabbits. There were so many that they had to get help against them as they did on the Balearic Islands. They cut down the trees and destroyed all the crops and the fields.

Clean and wash a hare. Cut it into pieces and put it in a clay pot. Add water, salt, olive oil, white pepper, dried cilantro cumin, dissolved murri and color it with saffron. Cook until done.

Add vinegar and roast it in the oven. When golden brown and almost all the liquid has evaporated remove from oven and let sit 15-20 minutes before serving. Eat well if God wishes.

Rabbit can be prepared in the same manner.

LIBRA WITH MERRITOCHE POTTAGE RECIPE FROM THE 15TH CENTURY

Blanch almonds and peel them. Grind them in a food processor and blend them in broth. Stain through a woolen cloth into a pot.

Add sugar and cook, stirring constantly. When half cooked add sage leaves quartered. Add grease and grains of paradise. When cooked serve in bowls. Garnish with a mixture of sugar and ginger shavings. 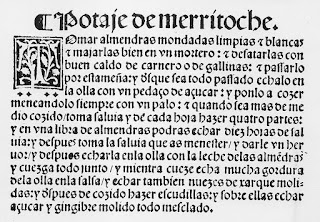 yeasts, leavening agents. Bakers in the Middle Ages used a live yeast culture or a fermented vegetable starter. Avenzoar stated that they have a property that activates digestion if the fermentation is balanced; on the contrary they will accelerate the alterations and corruption of the humors. [Ibn Zuhr/García Sánchez. 1992:49; and Gitlitz. 1999:14]

NOTE: Almojábana is not composed of one cheese but two, that of cow and that of ewe’s, because if you make it with ewe’s cheese alone, it will fall apart and runs out of the pie. If made with cow’s cheese, it binds and sweets water and becomes a solid mass that won’t separate. The principal for making it is to bind the two cheeses together.

Knead the two cheeses until they bind and do not run in the frying pan without becoming hard or glued together. If it needed to be softened add fresh milk, recently milked from a cow.

The cheese should not be very fresh or soft but strong without water. The people of our land in western al-Andalus, as in Cordoba, Seville and Jerez and elsewhere in the west make it this way.

Knead flour with yeast adding water or milk little by little. Milk is better and easier  to work with using one’s palms.

Roll it out. Do not do this as with honey dough, but it should be heavier but lighter than dough containing grease.

When the dough begins to rise, heat a frying pan with enough olive oil for deep frying.  Dip a hand in water and cut a piece of the dough and stick some of the cheese mixture. Cover it and press down on it by hand.  (It came be made in any shape, a ball, half moon or other.) Pick it up and put it in boiling olive oil. When golden brown remove it with a spatula and hold it over the frying pan for the oil to drip into it. Then place it on paper towels.

When done frying put the pastries on a large platter and sprinkle with sugar and cinnamon. If desired they can be eaten with honey or rose syrup and it is the best you can eat.

Honey was added after the fact as the pastries were a little dry.  That solved the problem,  This a delicious pastry for dessert or tea. 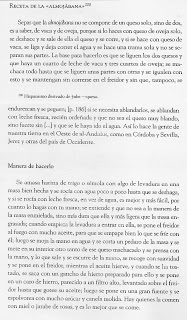 
1. Add ingredients in the order they are written. Turn slowly to speed 6 and mix 10 seconds.

When you taken them out of the oven, the top should be slightly brown, sides will be white and top will be hard the longer you leave it there to cool, the softer the bread will become. Remember it is flour so if you turn the dial up to a high speed you will get it all stuck on the lid, if you do it slowly you shouldn’t have anything on the lid.

The author of the recipe prefers to shape her 8 rolls like small hot dog rolls. She claims they are easier to eat.