LIMONADA WITH A 20TH CENTURY VERSION OF MEDIEVAL LEMONADE

llimonea OCat limoneha, limonea Eng. 1. lemonade. 2. Arab juice consisting of mashed almonds, hen broth, sugar and lemon. 3. boiled almond milk seasoned with lemon juice. There is a recipe Nola titles as “limonada,” which was common in Spain by the 13th C. It is a sweet and sour sauce basically made with almond milk and lemons. Sent Soví used chicken broth and added meat from the wing while Nola gives the same recipe but used mutton broth and bits of mutton. [Anón/Grewe. 1982:LII:96-97:Apè IV:247; Aquilera. 2002:94; Lladonosa. Cocina. 1984:151. and Nola. 1989:xvi-2]

Scald almonds and peel them. Chop them in a mortar and mix them with broth from a hen. Mash the raisins in a mortar and add them to the broth. Strian this through in a cheese cloth, pression down on the mixture with wooden handle. Cook it, adding sugar and ginger stirring often with a wooded spoon.

Once cooked add lemon juice and bring to a boil. Boil gently about 5 minutes stirring constantly. Serve in soup bowls, garnish with sugar. 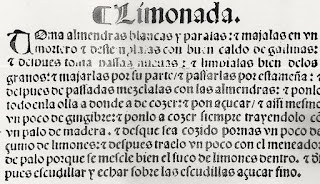