1. a small monkey in Tunis.

2. monkey pastry, egg dishes and egg stuffing for fowl in Hispano Arab recipes called as such. The mass looks like a monkey head but there is no monkey in these recipes. It was a very popular dish served during the third course during spring banquets of Philip II and prior to that. See bollo maimón.

Maimon, however is the surname of Maimonides (Rabbi Moshe ben Maimon) who prescribed Matzah Ball Soup, for respiratory problems in his 12th C. Treatise on Asthma. (See blog titled Maímondes published February 1, 2016.) Although the exact ingredients are unknown, it consists of chicken broth with matzah balls (containing unleaven meal), egg, oil, seasonings and formerly with vegetables. For centuries, chicken soup has used as a remedy for a variety of health problems. The vegetables used in the soup contain chemicals with medicinal attributes. At the same time it is thought that chicken contains a chemical component that neutralizes toxins found in the vegetables. Ibn Razīn gives a recipe for “monkey” soup while Nola provides a recipe for the sick.


Preparation
In a large mixing bowl, combine eggs with seltzer, and schmaltz or oil. In a small bowl, stir together matzo meal with baking powder (if using), salt, and pepper. Add dry ingredients to wet ingredients and stir to combine thoroughly. Refrigerate uncovered for 30 minutes.
Meanwhile, divide stock evenly between two pots, season both with salt, and bring to a simmer. Add diced carrots and celery and dill sprigs to one pot and simmer until just tender; discard dill sprigs and keep warm.
Using wet hands, and re-wetting hands as necessary, form matzo-ball mixture into 1- to 1 1/2-inch balls, and add to simmering pot of stock that doesn't have the carrots and celery. When all matzo balls are added, cover and simmer until matzo balls are cooked through, 1 hour. Cooked matzo balls can be kept warm in their broth until ready to serve.
Using a slotted spoon, transfer matzo balls to serving bowls (you should have at least 3 per bowl); strain matzo-ball-cooking broth and save for another use. Ladle hot clear broth with carrots and celery into each bowl and garnish with dill springs. Serve.


[1] Ordinary flour was used for the lack thereof. Three cups of flour were used.
Posted by Suey at 9:00 AM 0 comments

MAGRA WITH RECIPE FOR CHOPPED VEAL IN SAUCE

Season the meat with salt and put it in a roasting pan with a little lard. Put it in the oven to slowly roast. Turn it frequently and when half done add two tablespoons of water. It should be done in one hour. Remove from the oven and let it cool.

Add the rest of the lard and the finely chopped onion to a frying pan. Heat it and lightly fry the onion. When the onion is almost toasted add diced bacon. Turn it was remove a little of the grease.

Cut dice the meat and add it to the frying pan. Immediately add the wine and bring it to a boil for 2-3 minutes. Chop almonds in a mortar. Add bread soaked in vinegar.

Add this to the frying pan. Season with spices and add meat broth.  Finally let it cook slowly until the meat is tender.

When ready to serve sprinkle with finally chopped mint.

(The addition of 2 garlic cloves to the dish changes it considerably, enhancing the taste.) 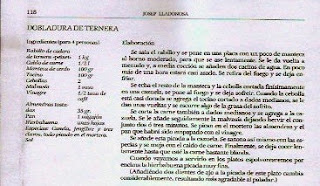 Between the 12th and 13th C atriya took on the meaning of any pasta made with durum wheat including couscous, lasagna, gnocchi. taglierini, vermicelli, etc. It was not the cylinder shaped macaroni eaten today. At first itriya is thought to have been little pasta balls that needed to be cooked for a short time, which was essential when there was a shortage of firewood especially in deserts. By the 14th C it was defined as a thread like pasta made with flour.

Wright points out that macaroni is historically important because it is dried pasta that can kept for years. This helped to reduce famine. It was stored by governments to curb inflation especially during years of soft wheat (T. aestivum) famines (see pan). Not only is macaroni nutritious but also the consumption of it during these times instead of bread helped prevent disease produced by dangerous bread flour substitutes (see almortas and ergotismo) in some cultures and classes of people.

Macaroni contributed to the age of exploration because sailors could make longer voyages due to long lasting macaroni. (It is wondered today why Samuel Coleridge’s Ancient Mariner did not have his ship loaded with it.)

Romans have tried to claim fame as the inventors of macaroni (made with durum wheat) but Wright maintains no one can prove where it originated. Contrary to Perry, he speculates that it came from the Arabs whose nomadic population was in need of food that could be transported long distances without spoiling. It was not the Chinese because they made their pasta with millet flour. Macaroni became a stable for Arab military campaigns. Sawiq, a dried barley product, was carried on their journeys and prepared with water or milk for consumption. Rich and poor Arabs preferred dried pasta when it became available as it is tastier.

Apicius, in 1 AD Rome, does mention pasta but his is made with soft wheat which spoils rapidly. Perry, on the other hand, states that itriyya, a strong dry pasta is of Greek origin and was known to the Arabs around the 8th C. Through Ahmad ibn Muhammad al-Razi (888?-955?), the Arab geographer, reports that during this period it is known that hard wheat existed in Toledo, Spain and it can assumed that this product was being consumed.

Anon Al.Andalus provides a recipe for atriya cooked with fatty meat, such as mutton, in boiling water. Sent Soví, the 14th C Catalan manuscript, gives two recipes. The first boils them with meat or fish, as per the liturgical year, in water and serves them in soup bowls with almond milk and the latter adds raisins. The second recipe is similar to the Hispano Arab recipe. Grewe, editor of Sent Soví maintains that macaroni is of Hispano-Arab origin. Lladonosa states that the most recommended way of boiling atriya during medieval times was in almond milk.

Wright reports that the word maccarone was used in Sicily by the 15th C but it was only consumed by Jews, who inherited the custom of eating it due to their close commercial ties with Arabs, and upper class Christians. In 1371 macaroni cost three times more than bread in Palermo. In Europe, it did not become a poor man’s dish until the late 18th C. See fideo.

Make a broth. When the meat is tender strain into a clean pot.

Blanch and peel almonds. Grind them in a food processor. Add broth and grind again. Stain through a cheesecloth into a pot. Add olive oil and salt.

[1] This is the Medieval Spanish Chefs edition. 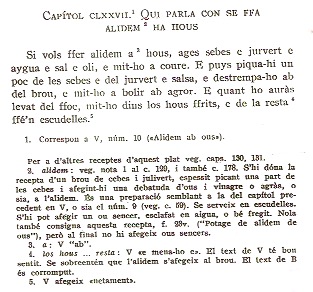