MANTELES WITH 13TH CENTURY RECIPE FOR CHICKEN (OR DUCK)

OFr. naprtie (fr nappe a cloth), MEng naperousnes (cloth ?) napery, draper, Eng tablecloth, linen for a table; white linen cloth in general. The use of them was first documented by the Romans. The Hispano Arabs used fine leather ones instead of cloth as the Christians who had them made of linen or cotton used especially for banquets.

Except in when on war campaigns, they were prescribed in Spanish etiquette books for the upper classes. Instructions for layering them on tables in medieval manors, in England and Spain are complicated but precise. Three layers of clothes were used in late medieval times in England. The two upper ones almost touched the ground. They were overlapped as linen as they were only 63” wide. As tablecloths were a sign of good manners, they were used for picnics.

Clean a hen or other fowl.

Place all the ingredients for the stuffing in a food processor and grind them together. Stuff the hen between the skin and meat. Put the remainder in the interior and sew it shut.

Put the hen on a spit and roast it until brown on all sides. Put the remaining ingredients in a pot. Bring to a boil. Add the hen and let it soak in the broth. When cooked, garnish it with five eggs. Turn off the heat and leave on the hearth stone until it cools. Remove stuffing, carve an serve.

This can also be done ina frying pan with the sauce in the oven. Either way is notable.


[1] Strangely, there are not Spanish Medieval texts containing recipes for duck. As it is obvious ducks were eaten, duck was used in this recipe instead of hen. 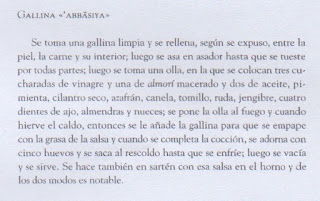