MERLO, -A, WITH A 3TH CENTURY RECIPE FOR CHICKEN "PIE"

OCast. mierla, L. Turdus merula, MEng Woozel-cock, black ouzal, merle, chucket, gottling, Eng. blackbird. They are abundant in England and Spain, France, Scandinavia, throughout the Mediterranean to the Middle East, Turkey, Caucasus, Morocco, Tunisia, and the Atlantic islands such as the Azores, Madeira and the Canaries. They are migratory birds going north in March-April and returning to the southwest in late September. They inhabit woodlands, forests, mountain ranges, hedges, estuaries, marshes and lake regions, from sea level up to 1500 m.

In Spain they live in Andalusia, the Sierra of Gredos, Picos de Europa, Barcelona and the Llobregat Delta, Cantrabria and the orange groves of Levante. Shakespeare described it as the “Woozel-cock so black of hue with orange-tawny bill.” While Suero Guiñones hosted the Leonese Tournament in 1432, during a dinner in his banqueting tent, he had his “ five and twenty blackbirds” (except in this case they were pigeons) baked in a pie and when the pie was opened the birds flew out between courses as a merry mid-dinner jest to set before the master as was done for kings from time immemorial in Spain and England.

Servants were on hand with other birds to beat the blackbirds or pigeons out of the hall. Far away from banqueting halls, when spring appears, the cocks take up summer residence, marking their territory and maintaining border wars with other species from sunrise to sunset. They never fight. It is a battle of nerves dodging at each other. They dash back and forth and kick up leaves making it look more like a ritual than a game.

When the hen appears, the male has gained its territory, a monopoly on the food supply, including insects, fruit, and worms, a site for a nest and material to built it. It is a process of survival of the fittest, having space for itself, not for its mate. In spring the blackbird begins to sing. It is noted to be the most melodic bird of Europe and sings in harmony. It will sing at night and on rainy days. It is reportedly a better vocalist than the mocking bird (which explains why the blackbird was chosen for jesting with music loving kings).

When the female appears, sexual activity goes on for days. They build a cup shaped nest with a layer of soil or mud inside and stems of plants outside. The nests are built in low areas among small pines, in gardens or in the beams of low roofs. Then female alone incubates the eggs for 11-14 days. The chicks remain in the nest some 12-13 days, although they continue to be fed for another two weeks. Mates have two or three broods a year.

Peel and quarter onion. Put it in a food processor with 1 c water to make juice. Do the same with sprigs of cilantro.

Clean the chicken and put it whole in a pot with pepper, Chinese cinnamon, lavender, coriander, a spoonful, and a half a spoonful of murri, and salt. Add water, if necessary to cover chicken. Cook it until it is done, about 1 hour.

Remove chicken from pot and carve and debone. Remove excess liquid if necessary as chicken should be moist and not soupy. Add peeled, chop and toasted almonds and toast pine kernels. Mix the nuts with the chicken. Pour all the ingredients into an oven-proof dish.

Pound innards. Put them in a food processor flour and breadcrumbs.  Chop four onions if preparing two chickens, or two if there is only one. Beat all this in a food processor until blended. Spread this over the chicken mixture. Put the dish into the oven. Cook until the topping solidifies, about 40 minutes.

Boil eggs. Shell them and cut into quarters.  Garnish the chicken with this.


[1] Chicken was used as 5 and 20 blackbirds just did not happen to show up on the day of preparing this pie. 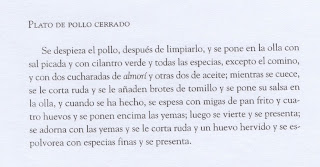