From the 11th C at least, meals were served in the hall or salon of nobles and tables were boards set on saw horses. When meals terminated, the boards and supports were removed for dancing or entertainment. Further, there was a head table for the noble and the most important guests on a dais and often a canopy above it. Above the lord’s chair the Cloth of Estate was hung on the wall.

Servants of rank ate at the same table as the lords or where more than one table was required they ate at the “lower” table in the same room. From this came expressions like “above the board” or “above the salt,” meaning the lord and others dining on the platform and “below the salt” meaning those dining at tables in the floor of the hall. Only in convents was there a specific room for meals called the refectory.

The menus of each social group were different. Those above the table received the best cuts of meat, fowl or fish and elaborated items. Birds were a delicacy. As they had to be hunted, before guns came into fashion, with a bow and arrow or with traps in the ground they were prized items.

From the lower table down the more meager the food served to them. Lower tables received anything from pottage to bread and lard.

2.  abundance of food in the concept of   “the meal”. See comida, panes and refectorio.

For a garlic sauce for capons, geese, hens or partridges roasted on a spit, make a sauce as follows: combine thinly sliced white bread, peeled garlic, and cheese. Put all into a food processor.  Add enough olive oil to bind it.

Then add cold water or broth. Warm this over a burner and stir until thick.

While spit roasting the fowl put a pan below it to catch the drippings. When done, remove the bird from the spit and carve. Dip the meat into the garlic sauce to cover well.

Instead of serving the garlic sauce and fowl as soup, it is better to serve it as a thick sauce.


[1] Food had categories. The higher the category the more the lord impressed the guests as seen with 15th century nobles like Miguel Lucas Iranzo, Constable of Castile and Ralph Neville, Earl of Warwick in England. Fowl was the most highly regarded. Meats such as goat, lamb and pork followed. Vegetables, rice, pasta and legumes, which were not lacking but did not receive comment due to the prestige of the meats.
[2] See Nola’s xxí Potaje que se dice de alemendrate (Almond Pottage) for a simular recipe.
[3] A 5 lb chicken was used.
[4] The amount depends on weather the récipe is for a broth or a sauce.
[5] after adding the pan drippings. 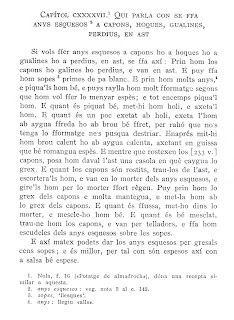