[1] It should be noted that as per the category of the person, the category of the meal. Noble men going off to war were given horsemeat to make them stronger. Women were not given that. The higher the rank of the aristocrat the finer the meal served. Servants and slaves received meals according to their category. A very black slave in the Alhambra who applied saffron to his skin to make it golden black, had a higher rank than a peasant. He, therefore, received livers to eat. As in England, lard and bread was common in Spain among the poorest. This recipe, therefore, was special amongst the servants of a higher level in the palace who had the privilege of eating in the kitchen. 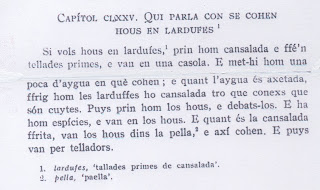