MONTORO, ANTÓN DE - WITH A JEWISH RECIPE FOR BURIED TREASURE

(Cordova 1404 -1480? Seville?), He was nicknamed “Cordova’s Clothier” as he was a used-clothes dealer as well as a taylor until 1473 when a wave of anti-Semitic riots broke out. He fled to Seville and it is thought that he stayed there.

Montoro is most remembered his satirical poetry and Cancionero, which appeared in 1445. It contains loud, strong verse that is burlesque and jocose. It created uproars among his fellow poets for his political protests and discourse on festivals.

With time, he became respected as Spaniards came to appreciate the dramatic, scholarly fantasy in his works. He is thought to be a main contributor to the commencement of Spanish theater. He was never a member of the court but seemed to have good relations with nobility including the Duke of Medina Sedonia, Pedro de Aguilar, Pedro de Estúñga, Miguel Lucas de Iranzo, the Marques of Santillana and Juan de Mena among others.

After 1474, Alonso de Aguilar became his protector in Seville. Gitlitz, points out that Montoro was accused of not being a true convert for preparing Jewish dishes such as Pollo Judio (Jewish Chicken) and radishes. His wife was tried for being a heretic by the Inquisition in 1486 and burned at the stake.

DAFINA[1], A VERSION OF A JEWISH DISH WITH A BURIED TREASURE ADAPTED FROM HUICI’S TRANSLATION OF AL-ANDALUS #115 PLATO JUDÍO RELLENO OCTULTO, p 79

Divide meat in half. Mix one part with fine spices, 1 tbsp rosewater, onion juice and salt to taste.

Make small meatballs this this. Sautée in olive oil,


Beat 3 egg with flour, ¼ tsp pepper, ½ tsp cinnamon, 1 tbsp rosewater and the rest of the eat. Sautée in oil until done and set aside.

Make an omelette with 5 eggs, salt to taste, ¼ tsp pepper, ½ tsp cinnamon. Heat oil in a frying and cook the omelette. When browned on one side flip it to brown the over side.

Rpeat this step to make another omelette.

Create the "hidden dish" in an oven proof dish by placing the ground beef over one omelette. Top that with meatballs. Cover that with the second omelette.

For the garnish, shell and grind pistachios. Lightly toast pine kernels. Sprinkle the pistachios over the second omelette and then the pine kernels. Decorate with mint buds.

If God is willing, serve it up.


[1] According to Perry, dafina means “buried treasure” as the name of the recipe infers. Traditionally, this is an Hispano-Jewish dish prepared the night before the Sabbath and left to cook all night as Jewish housewives were not allowed to cook on the Sabbath.  During the Middle Ages the pots of dafina were carried to the local baker where batter for bread was take from private homes, where ovens were not available to be baked. A Jewish boy was hired to watch over the pots of dafina to insure that no Christian products were added to the pots. Sephardic equivalent of the Ashkenazi dish cholent. For another recipe of dafina see blog titled adafina published October 23, 2010.
[2]
< font-family: "times"; font-size: 13.5pt;">see blog titled dárselo published November 29, 2013 for recipe.

[3] See blog titled almorí published August 25, 2011.
[4] During the Middle Ages when ovens were not available in homes, coals were placed over the lids of the pots to heat the tops of dishes. 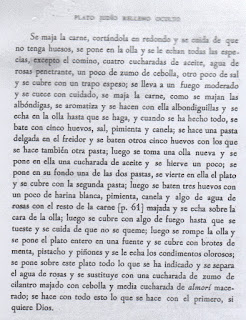