The Islamic holiday originated in Persia. Ziryab initiated the celebration of the New Year in the 9th C. court of Cordova and henceforth in Europe. It is considered to be the triumph of the warm light or spring over the cold darkness of winter. The occasion is celebrated for seven days from March 21st.

Besides gifts, there were picnics music, dancing and songs. In Kurdistan, Ziryab’s native land, there are still bonfires at night on top of roofs and mountains. Fire is the Divine symbol of life and of energy summoning the sun. It also symbolizes Kawa, a legendary Kurdish blacksmith who murdered the tyrant King Zuhak with his hammer and thus freed the Kurds thousands of years ago.

Decorate with the fried egg yolks and sprinkled with spices such as cinnamon and white pepper.

[1] As chicken was prepared for banquets, this recipe could have been used for New Year celebrations.
[2] 1 peeled lemon was used instead.
[3] Parsley and basil leaves were used as citron leaves were not on hand. 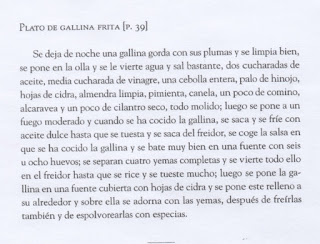 NATILLAS WITH THE MEDIEVAL SPANISH CHEF'S RECIPE FOR CREAMY PUDDING

creamy pudding. Puddings and custards continue to be homemade in Spain. This pudding consists of eggs yolks, milk and sugar with a touch of lemon zest, brought to a boil and then left to set in a mold or individual bowls. Every housewife has a variation such as the pudding poured over lady fingers. Prior to serving it is sprinkled with cinnamon. [Grosso. 1996:274; and Tapiello. 1994:142]

Pour ingredients for step 1 into a pot, mix well and heat gently taking care not let it boil. When the mixture starts to thicken, add ingredients in step 2. Stir well and pour into individual bowls. Let cool. Then refrigerate.

When ready to serve slice ½ banana over each dish if desired and sprinkle with cinnamon.

NARDO AN INGREDIENT FOR GELETIN

espicanardo, espicanardi, OCast espica nardo, Sans, nalada (spreading fragrance), Gr. rumi (from the mountain), L. Nardostachys jatamansi, Ar. sunbul or nārdīn, Fr. spĩca nardī, Eng. musk root, Indian nard, Indian spikenard. It is a native of the Indian Himalayas and is part of the valerian family. It spread to humid areas of northern Asia to the west by Biblical times especial as an oil. The plant is mentioned three times in Song of Songs. After the fall of the Temple of Solomon, it was prohibited as a sign of mourning. Christ’s feet were washed with the oil and women’s tears.

Indians have used it in medicine and as perfume. A costly perfumed ointment is extracted from the spikes and leaves, which was highly valued in ancient times. It smells sweet like galingale. The flowers appear in May and June. The roots and sprouts are edible. Sprouts are parboiled for salads or fully cooked to serve in various dishes. In cookery it was an ingredient to flavor dishes. With galingale and other spices it gave flavor to medieval meat gelatins. Then it was believed it made it jell.

It was used in medieval medicine to treat epilepsy and hysteria. Currently, the roots are used in herbal medicines to combat depression. An aromatic confection continues to be made with the leaves and spikes. See espliego. [ES: Anon/Perry. Sep 5, 02:105; ES: Carroll-Mann.Guisados 2-art. Jun 6, 01:ftn 35; ES: “Nardostachys .” Jun 13, 05; and Nola. 1989: xxii-2]

See blog titled cuajar published September 25, 2013 for a Nola's recipe in which he suggests   spikenard or galingale to make the dish jell faster.

OCat. taronje, neronge, OCat poncem, Cat naranja, L. Citrus auranium, Ar. nāranj, atranj or atruj, Per. naranguí, Fr. orange, P. laranja Eng. orange, Seville orange, bitter orange or cider. It is believed to have originated the Maya Archipelago. It is thought to have spread to India and the east coast of Africa. The Hispano-Arabs apparently introduced the orange from Persia to Spain and Portugal in the 10th C but some claim that Ziryab, who moved to Cordoba from the Middle East in the 9th century, is the inventor of “zalabia,” a sweet orange pastry still made in Algeria.

The bitter orange did not appear in the rest of Europe until the beginning of the 12 C. In 1200, St. Domenic is reported to have planted the tree for the convent of St. Sabine in Rome. The Portuguese created great orange plantations in Algarve (Ar. al-garb, the west), the southern region. Most English had never heard of an orange until 1289 when a Spanish ship docked at Portsmouth bringing, among other items, seven oranges and 15 lemons for Eleanor of Castile, wife of Edward I.

During the Middle Ages the most common was the Seville orange. As they were a luxury, only the upper class could afford them. European courtiers stuck cloves into them and carried them around to drive away nervousness and depression. Although bitter, the Seville orange has a stronger flavor than the China or sweet orange (L. Citrus ayrantium), brought to Iberia by the Portuguese at the end of the the 15th C or the beginning of the 16th C. It did not become common until the 17-18 C. in Europe.

Oranges were particularly common on the Spanish coasts during the Middle Ages, as the tree requires subtropical, temperate or warm climates for growing. It turned out to be a good investment as the tree may bear fruit for over 100 years. The “Constable Tree” taken to France in 1421 produced oranges for  473 years.

Oranges were incorporated into sweet and sour dishes, in which they were used as a souring agent like vinegar or lemon, and preserved with sugar. Avenzoar, who died in 1162, prescribed a pill including orange wood to
improve the breath and taking away disagreeable humors that are released. The orange peel is used for stomach upset. It helps to expel internal gases. This is done by boiling one ounce of peel for 15 minutes in one liter of water and left to cool. It is taken twice a day after lunch and dinner. Recently, it has been proven that orange pulp contains a combination of five adrenergic amines. These increase the metabolic rate without affecting the blood pressure or heart rate. They breakdown fat and burn calories. Eating oranges also suppresses the appetite.

Although their role in European medieval texts was relatively minor English puns on Seville oranges have been notorious for centuries. Shakespeare had his say in Much Ado II i.304, “
The count is neither sad, nor sick, nor merry, nor well : but civil, count; civil as an orange, . . .” See azahar and toronjas.

L. Brassica rapa, rapae, Fr. rave, MEng rapes, Eng. turnip. Although the word commonly refers to the white fleshy root of the plant, it does encompass the hairy leaves and yellow flowers. Since ancient times, it has been cultivated as a vegetable thought to have originated in Central or Eastern Asia.

After boiling the young shoots, they were served as greens or eaten raw if tender. The roots appear from May through the end of February in soups and stews and with legumes, meat and fish.

In medieval cookery, turnip-headed cooks always made turnips turn up for turnip-faced guests. Even cows were fed turnips. Sheep eat more beginning with the flowers and leaves and ending with the root. Obviously, they have eaten so many over the ages that now there are turnip sheep, except for little Bow Beep’s that never did turned up.

Gerard indicates that it is an easy plant to cultivate as it grows in fallow fields. There are so many varieties that it is claimed that American aborigines only ate Indian turnips.

They were known in Roman times as Apicius points out. To preserve them, he relates, they should be cleaned and placed in a vessel and covered with a mixture of myrtle-berries with honey and vinegar. He provides two methods for boiling them, one with herbs, honey, vinegar, liquamen and oil and another with oil and vinegar.  Finally, he gives a recipe for crane or duck with turnips.

Andalusian Arabs supposedly hated turnips but not only did they introduce them to Al-Andalus, they always turned up in dishes, sliced and seasoned with olive oil or garum and salt. They were cooked with meat or boiled and served with another legume and cilantro sauce. At the end of the 14 C in Alpujarreña, they were included in pottages consisting of lamb or mutton, chickpeas and beans. Mozarabes ate them with dried legumes like lentils or fava beans and with eggplant.

In León and Galicia turnips were consumed everyday of the week like the potatoe today. Turnips in northern Spain continue to be consumed frequently.

Villena advises to cut them vertically, like carrots, if eaten raw horizontally if boiled. The turnip is noted for its nutritive value, but has always been considered a poor man’s dish, which like garlic and onion, it turns up as the poor man’s aphrodisiac.

Select tender, fatty meat and chop it. Put it in a pot with onion and seasoning. Cook until almost done.

If cooking turnips separately, reserve 1 c broth. Wash cilantro leaves and put them in a food processor with the broth: Chop well.

Remove the meat and turnips from heat and add cilantro juice. Let sit 20 minutes before serving.

Wash and pluck chicken. Stuff the cavity with garlic heads, raisins and lard. Sow it shut with a string. Put the chicken in a pan with water and gently boil it until very tender. It should not take more than ½ hour.

Remove the chicken from pan and drain off excess broth. Remove the string from the cavity and spoon out the stuffing. Carve the chicken as per Villena's instructions: removing the wings, legs and thighs and slice the breast.

In the meantime make mujol sauce:

< font-family: "times"; mso-bidi-font-weight: normal; mso-fareast-font-family: "ＭＳ 明朝"; mso-fareast-theme-font: minor-fareast;">Pour this into a pot and simmer for about 20 minutes. Slowly mix in breadcrumbs until as thick as gravy. Before serving add honey.