PALOMA ZURITA, A POPULAR MEMBER OF THE DOVE FAMILY IN SPAIN

Cat xixell, L.Columba oenasEng stock dove. It is the smallest of the most common members of the pigeon family found on the Iberian Peninsula. Avenzoar described the meat as hot and dry with a gentle consistency. It is gentler, he maintained, than that of the sand grouse and the rock pigeon. The meat, he continued, is abundant in humid climates but it possesses the peculiarity of producing headaches. The necks and heads of pigeons cause the same. Sent Soví explains they should be cooked over a hot fire or coal. [Anón/Grewe. 1982: XVIIII:73: Apè III:240; and Ibn Zuhr/García Sánchez. 1992:51]

OCast torcaza (Note: this has nothing to do with the Columba araucana, the Chilean pigeon today), Cat. tudó, tudon, Gal, Port. pomba, L. Columba palumbus, Eng. woodpigeon. Both the males and the females are gray on top with a green and white patch on the neck. Underneath they are pinkish. They are 40-42 cm (16”) long, has a wing span of 75-80 cm (30-32”) and weighs 450-550 g (about 1 lb). The eyes are bright yellow. They are the biggest pigeons in Europe.

Villanova reasserts this calling them tudones (big wood pigeons). They do not walk but waddle. This is due to overweight. Their feathers weigh more than their bones. They eat any kind of grains, seeds, berries, pine kernels and acorns. They live in the forests and go to the fields to feed.

They are migratory birds.  In the spring, they found all over Europe, except northern Scandinavia,. In the fall, they fly to the Middle East and Morocco. In the 15th C, Juan Pacheco, the Marquis of Villena and favorite of King Henry IV, owned villages and large landholdings in Albacete, Alicante and Murcia where wood pigeons are so abundant that no question as to what the marquis and his retinue ate when residing on his properties in eastern Spain.

Normally, they are caught in nets. When roasted, they were carved in the same way as partridges. Wood pigeons are a major ingredient for gazpacho manchego, with quail, chicken and rabbit and other traditional dishes carried down from one generation to the next from time immemorial.

Avenzoar claimed wood pigeons cause melancholy and are coarse. Further, the woodpigeon is a symbol of love, independence and a vagabond’s life as they come go as they please. Reputedly, the Marquis of Villena was a great lover, independent and roamed as he pleased, as seen by the number of bastards he fathered. See tórtola.

[1] Quail was used as pigeons were not available. 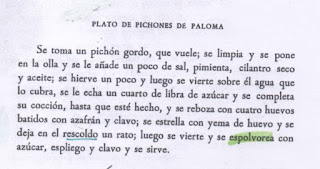 PALOMA WITH 13TH C RECIPE FOR PIGEONS AND OTHER SMALL BIRDS

Leon palomba, L. Columbidæ, Eng. pigeon. It can be wild or domesticated. In Spain and England there were several varieties. Aristocrats kept pigeon lofts for training carrier pigeons and to eat their meat. In Cordova, during the 15th C, there were several lawsuits concerning damages caused by pigeons living in noble’s pigeon lofts within the city.

In Two Fifteenth-Century Cookery Books, there are recipes for pigeons stuffed with herbs and garlic and roasted pigeons. Pigeon pie, still, is considered and exquisite dish in southern Spain and Morocco, where it is claimed that recipes go back to the days of Al-Andalus.

Villena explains that they should be carved in the same way as partridges except that salt is not sprinkled over the pieces. If roasted, they are eaten with a mixture of pepper and vinegar and cut in four parts if small. If large, the appendages are removed before carving.

At Suero de Quiñones’ knightly tournament in 1434, toward the end of one of the banquets, a cake was presented. Quiñones cut it in half with a knife and pigeons flew out. Contrary to “five and twenty black birds,” in England, this party was not thrown into a mass of confusion because falconers were on the spot with goshawks that they released forcing the pigeons to flee the banquet hall.

Avenzoar claimed that domestic pigeons are warm, have a humid constitution and by nature but are not as fine as turtle dove meat. Pigeon meat has an extraordinary abundance of humidity, which produces headaches. The necks and heads of pigeons have the same effect. He continued to state that having pigeon cotes in or near the house is a safe guard against numbness of limbs, paralysis, apoplexy and rigidness and numbness. See perdiz.


[1] As a Muslim recipe, the sausage should be made with chicken meat but a pork sausage does provide more flavor. 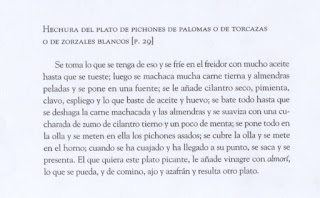 Perez explains this is not just an ordinary stick but a polished fluted rod or stick used for stirring food. It is not a beater or a whisk as these were not used in the kitchen until chocolate came into use. [Nola. 1989:xiiii-2:xix-4:xxi-2 etc; and Nola/Pérez. 1992:204]

Grind pine nuts with almonds in a food processor. Add broth and grind again. Strain all through a cheese cloth into a pot. Bring to a boil, reduce heat and gently boil. Add sugar, stirring constantly with  stick.

When done, remove from heat. Cover with a cloth and let sit 15-20 minutes. Sprinkle with brown sugar and decorate with a few toasted nuts.

[1] This is a runny pudding like natillas but it can be served warm or cold. This can also be a sauce over fresh fruit.

PALMETTO WITH RECIPE FOR HEARTS OF PALM AND SHRIMP SALAD

2.  palm sprout; tender palm from trees of the palm family. The best is the coconut for the taste is slightly sweet and it is crunchy and firm. By the 15th C nobles were eating them. Villena advised to skin them on the chopping block for the powder that comes out of them. Then stripe them lengthwise until the tender part is reached. Slice the ends to the tender part. Remove the palm seed and white membrane until the piece is completely tender. Today they are bought canned and added to salads.