PASADOR WITH RECIPE FOR SPIT ROAST PHEASANTS IN ONION SAUCE


lard for basting
For the sauce:
1 large onion
1 c wine
salt to taste

Clean pheasants and wash with boiling. Grease them well with lard to prevent burning.  Put them on a spit and roast until done, about 20 minutes.

Scald an onion in boiling water. Peel it. Chop it. Slowly cook it in wine until absorbed and the onion is tender. Add salt to taste.

Put the onions in a food processor and grind. Add wine and bullion cube and grind  again. Pour the mixture into a large frying pan. Heat and add the flour little by little until it thickens.


[1] For other recipes of pheasants roasted on a spit with onion sauce see Nos. 75 and 86.
[2] Chicken was used as partridge was not in season. 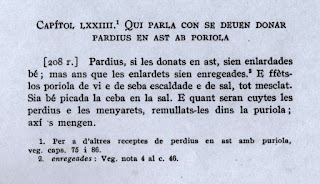