PAVO WITH A POTTAGE OF PARTRIDGE SPICES IN ALMOND MILK

pavo real, pavon, OCast, pauo, pauon, OCat pagó, paguó, pahón, Cat pagó, paó-reial, L. Pavo cristatus, Eng. peacock. Note the peacock in Spanish is called pavo or pavo real, which today is translated as “turkey” but in the Middle Ages there were none in Europe. The peacock is a native of India. Only the male tail feathers have eyespots.

Classical physicians customarily recommended that the throat of the fowl be slit and then hung with the feathers still on for a few hours before roasting. Sent Soví instructs that it should be killed and hung the night before it is to be cooked. This procedure was recommended for human digestion to be as rapid as possible for they thought this was like yeast added to bread because it was thought that it facilitated digestion.

Not only were peacocks well thought of in medieval times but after roasting the birds whole, their coats were put back on for a spectacular parade through the dining hall with a mantilla over the tail and a gold cloth baring the king’s coat of arms around the neck. They were normally served as a “sublety” or “entremet.” Removing the coat whole, prior to cooking, was a culinary art. For knights, the peacock was the symbol of power, see voto del pavo real.

Villena explains that the method for carving the peacock is basic for large birds. First the neck and tail are removed. Then the threads and the barding of streaky bacon (see albardar) are discarded. The wings are cut off the body and then the legs. The meat is removed from the bones. The breast is sliced lengthwise and then the, sternum, neck and pelvis are cut in half. Then the coccyx is sliced.

The king was served the first wing. Other parts of the bird were served to those at the high table. Peacock was not given to classes below aristocrats.

Peacock was a showy bird but the meat is dry and that of the male is very strong. Often hens or other fowl were served in peacock coats until the American turkey came to Europe, which replaced the consumption of peacock.

Avenzoar warned  that peacocks have the same properties as cranes (grullas), but more pronounced. He stated that they are coarser and have a drier nature than pigeons (palomas), although their other properties are very similar. He recommended peacock meat for those suffering from prostration and hemophilia, but thought them harmful for people of a warm nature. He claimed that they are digested with difficulty, especially during the summer season.

Wash well a shank and tripe of a lamb. Scald them with a junk of bacon. With this broth make almond milk using raw, peeled almonds well chopped and broth. Let sit 6 hours and strain.

Add lemon or orange juice or bitter pomegranates with a little honey. (These ingredients should be used moderately at the discretion of the cook.) Add the spices used in “salsa de pago”. Add ginger, cinnamon and saffron if a stronger mixture is desired.

Pour this into a pot and add almond milk. Cook until thick. When cooked, the mixture should have a sweet and sour flavor well accented by the spices. The color of the sauce should be between cinnamon and saffron.

According to the recipe, grease from roasting pheasants or chicken can be added: this should be added with caution as it can become excessively greasy.

*Also finely chopped chicken livers can be added after straining them. Well chopped meat from chicken and partridge wings can be added as well. It appears to be better to use the meat from wings mashed in a mortar and strained. This sauce should be thick and it is best to serve it in small quantities. 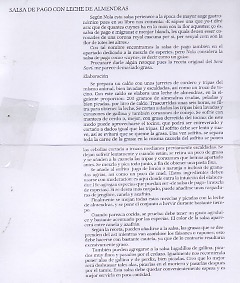 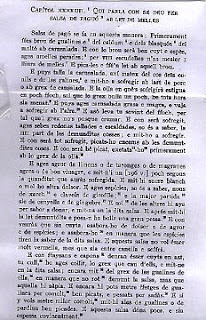 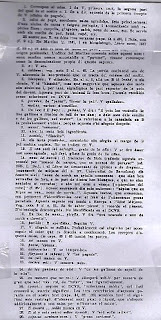