PEDERNAL WITH A RECIPE FOR GOURDS DISGUISED AS FISH

When it is time to trick a sick person who craves for fish and other foods, peel a gourd and remove the seeds. Then cut pieces lengthwise and two fingers wide more or less. Scald in boiling water. Remove and let drain on a cloth. Cut the slices, rounding on one end to look like a fish head and the other end to look like a fish tail.

Take a large dish and break the eggs in it. Add white flour, coriander and beat the mixture until creamy. Roll the “fish” in the mixture and set aside.

Heat oil and when it boils fry the “fish.” Remove and roll the “fish” in the creamy mixture again. Fry again. The recipe says to repeat this until the gourd is no longer visible and it looks like a fish but rolling the "fish" more than twice diminished the taste of the gourd too much.

When golden brown on both sides, place the fish on a platter and sprinkle with vinegar, murri or cilantro juice or something else.

As this is finger food, be cautious not to let anything drip on the flint stone ring if wearing one on the ring or baby finger.

[1] See blog titled Calabaza de San Roque for a different version of this recipe and for comments differentiating European gourds from American gourds. 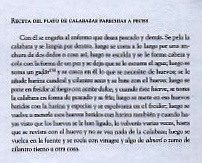