PICOR WITH PEASANT'S DISH OF LAMB

Grind half the lamb. Slice the eggplants in half. Rub with coarse salt and turn out on a towel to let them bleed for about 20 minutes. Boil one eggplant. Remove from heat and cool. Remove skin. Squeeze out excess water and mash. Mix this with the ground lamb. Add half the spices such as pepper, cilantro, lavender, murri, cumin, cinnamon and chopped almonds. Make meatballs[1].


Chop the other eggplant and fry in oil. Take the other half of the lamb and chop. Mix it with the other half of the spices: pepper, cilantro, saffron, cinnamon, cumin, lavender, vinegar (to make it sharp) and a garlic clove mashed. Fry this in oil, until it is nearly ready. Remove half the meat. Then add the chopped eggplant and layer this with half meatball/eggplant mixture. Top this with the rest of the meat and the rest of the meatballs.

Sprinkle with the ¼ c chopped almonds, egg yolks and cover with a thin layer oil; put in the oven and leave until dried and browned on top. Before serving, sprinkle with with a mashed hard boiled egg.


[1] If too soft roll in flour and refrigerate the night before finishing the dish. 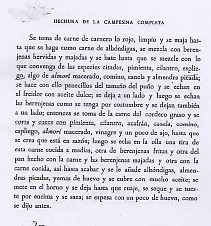