POLENTA WITH A BASIC RECIPE FOR POLENTA


polenta, thick porridge made with any grain used in bread making such as spelt, barely, wheat, etc. Today it is made with cornmeal. Polenta is a corruption of the Roman predessor pulmentum, a soft and pasty mass of dough made with crushed grain or that which is boiled in water or milk to which cheese and honey or other dressing is added. It is a thick gruel or a coarse loaf when placed in a bowl or vessel.

Roman legions ate it as a staple. Pliny provides a recipe for polenta using barley. Apicius’ is cream of wheat, which he molds, slices like cake and fries. He serves it with honey.

Traditionally these were prepared as a thick creamy porridges with chicken broth and almond milk used exclusively by peasants and poor villagers throughout medieval Europe. There is a recipe for it in Sent Soví which is called gachas, which consists of flour and water. Adding oil and salt half way through with boiling sugar or honey is optional.

Nola elaborates on this recipe calling for peeled barley or spelt wheat and almond milk and he sprinkles sugar and cinnamon on top.
For a more refined pottage he uses hen or mutton broth, which he claims to be good for the sick because of its delicacy.

Throughout history there have been few variations. In the 13th century Al Andalus cookery, gachas were made with flour or semolina which was called asida. They also made gachas with semolina and steamed it with couscous, anise seed could be added.

Jews had their version, which they call harisa. In León, it was made with barley or chestnut meal to which cheese and a broth from stew or pork fat could be added. On fish days, eels, crab or other fish were used instead of animal products. See
.

A BASIC EVERYDAY RECIPE FOR POLENTA

Put all the ingredients into a sauce pan. Bring to a boil, stirring constantly. Reduce heat, continue stirring for about 5 minutes until it thickens. Remove from heat and our into a rectangular container. Let cool.

When ready to eat, cut the polenta into smaller rectangles or circles. Heat olive oil and fry. Remove from heat and place on paper towels to absorb the oil. Drizzle with honey and serve.


Cut the pork into strips or individual ribs and set the pork aside. Smash the fresh oregano with the flat of your knife and put it in a large bowl. Combine the onion, wine and honey with the oregano in a bowl. Mix it well. Marinade the pork over night. Cook the pork on a very hot fire to sear and partially char the pork.
Posted by Suey at 9:00 AM 0 comments

PLATO WITH 13TH CENTURY RESIPE FOR A DISH OF EGGPLANTS

Cut eggplants in half. Rub the raw sides with thick salt. Turn out on paper towels and let sit at least ½ hour.

Peel eggplants. Mash them in a food processor with the onion, murri, pepper and coriander and salt. Put this in a pot and bring to a boil. Cover and simmer for about 15 minutes.

Grease a marmite with olive oil and pour the mixture into it.

Grind walnuts in a food processor and add egg whites.  Mix well. Pour this over the eggplant mixture in the marmite. Dot it with egg yolks.  Heat 20 minutes until eggs are soft.

Garnish with pepper an0 rue before serving.


[1] Note that rue is very strong. Just a few leaves can take over the flavor of the dish. If using, do so sparingly. 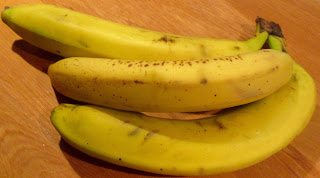 L. Musa sapientum, Eng. banana. It is first documented in 303 B.C. It is thought to be a native of Malaysia and SE Asia. In 79 A.D. Pliny not only praised the taste of the banana but stressed the importance of this food used by the old wise men of India. It was not widely known until the 19th C. but is mentioned in the Calendario de Córdoba in the 10th C. It is known that a variety of banana was brought to Spain by Ibn Bassal in the 11th C from India, which was cultivated as an ornament, Although not cultivated around Cordoba, Granada was famed to be the best producer. Benavides-Barajas claims that there are a few recipes for banana sweets in Al-Andalus but gives no references.

The banana contains more sugar than the majority of other fruits. It has the same value as wheat or rice in providing energy to the system. One hundred grams of fresh banana yield the same amount of calories as 100 gr. of meat. At the same time, it contains the 10 grs. of organic calcium like milk and cheese. It is calculated that an adult needs five grams daily to repair the vital functions of the body. It has a considerable amount of phosphorous that is vital for intelligence. It is also a source for fluoride, iron and iodine, which is essential against gout. It contains as much vitamin C, as other fruits, plus vitamin B6, vitamins D and E and potassium. Shortly after the discovery of America, it was exported from the Canary Islands to America.

Bananas are not mentioned in any of the medieval recipes reviewed by the Medieval Spanish Chef or in the 19th century recipes in the archives of the Baroness of Almiserat.

There are claims that the banana split was known in the Middle Ages but the
use of chocolate ice cream makes this doubtful as chocolate is a new world product.