PUCHERO, -A, WITH A 14TH CENTURY CHICKEN RECIPE SO DELICIOUS THAT LICKING THE BOWL IS A MUST!

Clean chicken. Remove guts and cut off claws,. Put tit in a pot stuffed with chunks of lard in the breast. Put the chicken in a pot. Cover with cold water. Season with spices and herbs. Bring to a boil. Reduce heat and simmer for about one hour, until tender and the liquid is reduced to a sauce.

Mash the livers. Add one mashed garlic clove and a little liquid from the pot. Mix this with the “mujol” sauce. Add it to the pot and continue to simmer for about 20 minutes.

At the end of cooking time, add juice. Bring to a boil. Remove from heat.

Line individual soup bowls with sliced bread. Pour the soup over this and serve hot.


[1] Grewe translates this as olla while Gázquez uses the word puchero.
[2] Geese or other fowl can be used instead.
[3] Gázquez recommends salt, pepper, saffron, nutmeg and caraway.
[4] 1 qt almond milk, 1 tbsp ginger, 1 tsp saffron crushed, 2 hard boiled egg yolks mashed,1 c breadcrumbs, 1-2 tbsp honey. Mix these ingredients and put them in a pot. Bring to a boil and simmer. 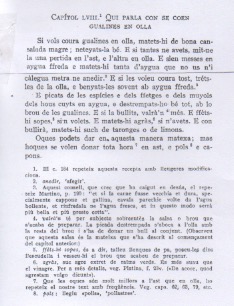