RATÓN WITH 13TH CENTURY RECIPE FOR A DELICIOUS MEAT TART

OCast, mur, Eng mouse. In the 13th C Ruíz presents an adaption of the fable: The Town Mouse and the Country Mouse attributed to Aesop (6th C). The country mouse offers a fava bean while the city mouse fresh bacon, baked bread, cheese etc but the message amounts to the same: "Better beans and bacon in peace than cakes and ale in fear.". . Mice, by the way, were consumed by Spaniards during famines. [Ruíz-Brey. 1965:1370a-1384d:211-213]

Chop lamb using the fattest parts. Heat olive oil in a pot and sautée them over moderate heat with salt, onion, saffron, cumin, garlic and half the vinegar.

When the meat is done select vegetables such as the largest possible turnip, eggplant and gourds. Peel them.  Leave them whole. Put them in a separate pot. Add enough water and the rest of the vinegar  and cook them. 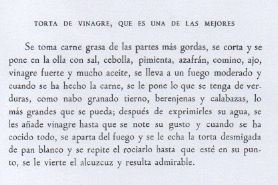