OCast rabioles, rafieli, OCat robíoles, Eng ravioli. It was brought to Al-Andalus by the North Africans between the 11th-14th C. Manuscripts from the 13th C in the Alhambra mention it. Nola’s raviolis are stuffed with hazelnuts and pine kernels and fried in lard. The recipe appears with others for fried dough, which can be interpreted as pastries or ravioli.. See fruta de sartén and pero. [Benavides-Barajas. Alhambra. 1999:104; ES: Medieval Chef. Manteca. Mar 16, 16; and Nola. 1989:xlvii-5]

Grind hazelnuts and pine kernels with yolks from hard boiled eggs. Add raw eggs and blend them into the nut mixture until neither thin nor thick. Add sugar, rosewater, cinnamon and ginger. Blend this mixture with the milk and flour paste. Let rise 2 hours or overnight.

Place the ravioli in boiling water for 5-6 minutes, or until they float. You can also test for doneness by nibbling on the edges to test.

The Medieval Spanish Chef made pastries with this recipe, which were very tasty. See blog titled manteca published March 16, 2016 for the recipe.

[2] Ravioli can be homemade but ready made ravioli is an option. 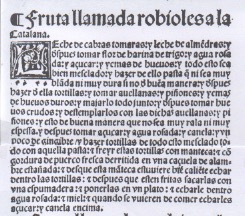