RAYA WITH 14TH CENTURY RECI0PE FOR ANGEL SHARK WITH ROCKET

Select angel fish and wash it well. Scald it in boiling water.  Remove it. Discard the liver, innards and head.

Put it in a casserole with salt water and bring to a boil. Remove from the casserole and remove the scales and bones.  When clean set aside on a serving platter in a vinegar marinade.

Wash the rocket and scald it in boiling water. Chop it well in a mortar while adding vinegar. Season with spices. Add enough mosto to make it sweeter than acid. Cover the fish with the rocket and serve. 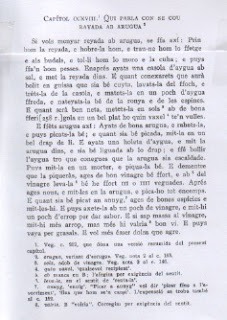