Eng. Rhazes, Abu Bakr Muhammad ibn Zakariyya al-Razi (865-925 A.D.), These dates are debatable as other dates given are within the years 841-936. Rhazes was born in Rayy, northeastern Persia near Teheran and trained in Greek science. He was a physician in the court of Baghdad, hospital director and teacher. Rhazes devoted his life to scientific research and almost 250 written works are attributed to him.

The Greco-Roman civilization disintegrated between the 7-8 C. A.D. As a consequence, the Arab world picked up the threads and furthered scientific research. Physicians, like Rhazes, were highly esteemed in Muslim countries. He was influenced by Galen and Hippocrates and with them became one of the founders of clinical science. Like Hippocrates, Rhazes observed patients carefully and keep clinical records on them. Due to the insistence of Ibn al-'Amid, vizier of Rukn al-Dawla, these were edited and divided into some 25 volumes known as the Kitab. al-Hawi fi 'l-tibb (“The Comprehensive Book on Medicine”). King Charles of Anjou in 1279 had his Jewish physician Faradj b. Salim (known as Farraguth) translate them. This became one of the most popular medical books in medieval Europe and continued to be as late as the 18 C.

Rhazes was the first physician to distinguish the difference between measles and smallpox. His findings were published separately. His most important work on alchemy Kitab Sirr al-asrar (“Secret of Secrets”) covers distillation, calcinations, and sublimations processes. He established procedures for separation, purification and mixing of substances. As a result of his development of simple and composite medicines, mercurial ointments were introduced into the western world. Further, because Europeans followed his instructions, they learned how to prepare important acids such as pure sulfuric acid.

Rhazes’ Kitab al-Mansuri fi al-tibb (“The Book on Medicine for Mansur”), dedicated to Mansuri, Governor of Rayy, contains 10 books that Tobiel ben Samuel de Leiria, a Jewish physician living in Portugal the last half of the 14 C. translated from Latin into Hebrew.

The Ninth Book became the standard source in therapeutics in Europe and continued to be throughout and after the Renaissance. Rhazes developed pharmaceutical apparatuses used by apothecaries until the early 20th C. including beakers, flasks, phials, glass vessels, mortars and pestles. Further, he wrote about nutrition. See cafeto and jengibre. [Benavides-Barajas. Nueva-Clásica. 1995:15; ES: Anon/Perry. Sep 5 00:ftn 3; and ES: Rhazes. Nov 5, 02]

Select and was a plump chicken. Rub it with salt to help loosen the feathers. Discard feathers and remove innards.

When clean fill the cavities with ginger, mastic, cinnamon, cilantro, salt, and onions. Sew the breast shut and tie the legs together.

Fill a pot with water. Add the chicken. Bring to a boil. Reduce heat and gently cook until the meat is cooked.

In meantime, select a chicken breast and remove the bones. Grind the meat in a mortar. Make meatballs with it. Dip them in slightly beaten eggs. Mix spices with breadcrumbs and roll the meatballs in them.

Heat oil in a frying pay and fry the meatballs. Set aside when done.

When the chicken is cooked, remove from pot and carve. place the meat on a serving platter and place meatballs around the edges. Garnish with ground cinnamon and sprigs of mint leaves. 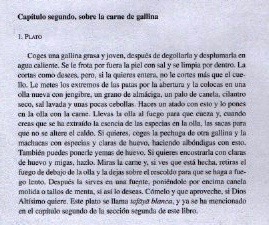