Leon robla, L. Quercus pyrenaica, Fr. chêne des Pyrenèes, Eng. Pyrenees or Spanish oak. It is a relative of common or British oak, Quercus robur, entwined in English history. The distinguishing factor of common oak is acorns grown alone or in pairs on long stems. The most attractive feature of the Pyrenees oak always has been the acorn, see bellota, encina and pata negra.

Further, the nectar flowers bloom in Spain from late August to late October, which bees use to produce a variety of honey, see miel mielada. Also it was a source of firewood. While the British oak is of utmost historical importance, the Spanish oak is overshadowed by the cork oak and the holm oak, see alcornoque and encina.

Make donuts, fry and set aside.

Put honey in a pot and bring to a boil over moderate heat; skim it. Mash donuts. Mix them with chopped and fried almonds. Add honey with rose water and fine spices. Heat all and when the honey is melted, remove from heat and let cool.

Smear hands with oil and make balls with the honey mixture. Put them in a bowl.

Make dough with flour as described above and extend it over a flat surface. Cut dough in round shapes to make balls.  Fill each ball with a honey ball.

It is possible to fill them with dates instead of honey. The dates should be cleaned, pitted and mashed.

The instructions call for baking the balls but they are better when fried in olive oil. 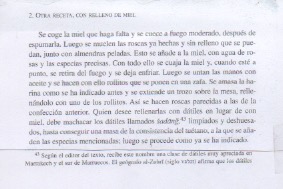