The entire life of this medieval Spanish poet is conjecture, except that prior to 1337 he actually was the Archpriest of Hita, a small town on the road to Burgos in Guadalajara. It is thought that the Libro de buen amor, cited for its culinary contributions in this work, first appeared in 1330. A second edition is believed to have been written while he was in jail (1337-1350 perhaps) under the orders of Gil Albornoz, Archbishop of Toledo, for “irregularities of conduct”.

It is not known if it was for his satirical works concerning his superiors or his personal conduct. The second edition was completed in 1343. This is picaresque epic poem, with lyrical digressions, on the entire society in the Castile of his times filled with irony and intrigues of nuns, clergy and laity including great ladies. It is filled with jest and the simple
instinctiveness of peoples including Moorish dancing girls and bonnie country bumpkins.

It is so complete that Ruíz gives the reader the recipe for bread before he can sit at a table to eat it. Then he tops it with salted pork or lamb, which makes the reader feel more at home looking through Ruíz’ keyhole into the complete ironical picture of his 14th world. [Ruíz/Brey. 1965:entire; and Ruíz-Saínz. 1986:entire]

Soak semolina in 1 c water. Add a little salt and let sit until dissolved. Mix well. Add yeast and knead little by little adding water until the dough is formed. Then addriqāq and mix well. Make bread rolls as desired. Put them in a linen or wool cloth and cover with lamb skin or something similar. Let sit until the dough rises, which will be obvious as it becomes uncovered. Hit by han and listen to the sound. Bake in the oven. When done, scrape and put in a receptable and eat at will.

If using darmak, refined white flour, or other fine flour, soaking is not necessary but it should be left to rise. In this case, add yeast and salt and immediately knead. The water should be warm, if the Almighty God so desires. 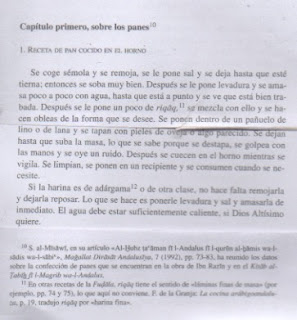