2. sauce. Medieval Europeans followed the Arab custom of having sauces for everything and for every occasion. Then, as today, sauces are the elegance of cookery, the touch of character, the art of extracting and combining flavors and the final decorative touch, color.

The staff in medieval Al-Andalus had a chef or chief cook and a sauce maker, who held the second highest position. The sauce maker had to have the qualities of a chemist, apothecary and an artist. Sauces were brought to a high level of perfection that could be identified by the smell and by sight. Sauces needed to be tasted and corrected. The balance of the ingredients was the key to success. Often sauces were placed in two categories, bechamel sauces and dark sauces. To make any sauce, it was required to use the accepted basic ingredients, a liquid, a thickener, herbs and spices.

What is a Spaniard without sauce? Sauces were so popular in the Middle Ages that the position of saucier or sauce cook was part of the household staff.  He was in charge of making and preserving sauces, juices and vinegars.  His rank was inferior to the cook.

Ingredients for the Sauce
for 4 persons

For a sauce for geese, capons, hens, pigeon or partridges, prepare the following dish: geese can be cooked on a spit  but it is better cooked in a pot. Prepare stuffing by cutting the neck two finger widths from the shoulder and cutting off  legs and wings. Parboil raisens and garlic and add salt. Mix all and stuff geese with this. Put fow on a spit and roast.

For the sauce: chop livers from geese and chick, bread soaked in broth. Made a hardy broth with the stomach or make another broth; let cool and strain to make the sauce more liquidy. The greese from geese or hens should be removed when boiling the mixture. While boiling, add salt if needed and prepare soup bowls.

Take the greese from the geese or hens, that has been set aside and put some in each soup bowl Add sauce and stir welll. Add more salt if necessary. Any type of fowl can be used to make this sauce.

[1] Broth from a pot, as stated in Sent Soví, it is a broth made with stomachs of various animals, especially pigs’. The stomach is cleaned and slowly cooked (in stock) resulting in a hearty broth. 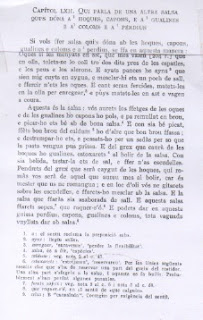