1. unpleasant. 2. bleed. Sent Soví instructs that the peacocks, pheasants or capons being prepared for cooking should be bleed from a vein in the mouth instead of the ear at sunset. The Harleian MS4016 states to cut the swan’s month in the direction of the brain to let it bleed prior to cooking, to save the blood for giblet chowder and to bleed crane, heron and pheasant in the same way.

It continues to state that goats were slit in the neck and left to bleed to death. Pigs’ aortas are severed to bleed them to death. Fresh lamprey were bleed to death in their own blood by placing them in a vessel and sticking two fingers into the naval. Kosher methods of the Jews included bleeding cows to death and removing all the blood from meats for consumption. Humans were bleed to balance the humours. [Anderson. 1962:78:81; Anón/Grewe. 1982:I:62]

OCast badeha, Cat albudeca, Ar. al-buttáikha (dim of battíkha), watermelon in the Middle East, melon in North Africa), L. Citrullus vulgaris, Ar. sandiaor baithasindiya (from Sinnd), Fr. pastèque, Eng. watermelon. Watermelon is believed to be a native of Sind (now a province of Pakistain). By Biblical times, it was common in the Middle East as Isralites ate it in Egypt as a vegetable (Num. 11:15).

As it was one of the most consumed fruits of medieval Arabs it was brought to Spain from Persia or Yemen. It is first mentioned in Rabbi Ben Zaid’s 13thC Latin version of the Calendar of Cordova, in which he mentioned that it was an August fruit.

It is referred to as a vegetable in the Archpriest of Hita. Probably, this is because eating raw fruit was frowned upon in the Middle Ages. It was drunk as a refreshing juice. The Anón al-Andalus uses the seeds in his hyssop syrup recipe. Villena says nothing about cooking it and instructs that it should be cut lengthwise like melon. Avenzoar explains that it is colder and more humid than a cucumber; its nature is extremely heavy and the amount of yellow bile in it is so slight that if there is any in the stomach, it fights it. He recommends this to alleviate high fevers suffered by youths.[Anón/Huici.1966:505:275-276; Bolen. Cuisine. 1990:34; ES: Harper. May 15, 98; Gázquez. 2002:28; Ibn Zuhr/García Sánchez. 1992:88; Villena/Calero. 2002:42b; and Villena/Saínz. 1969:162]

L. Santalumalba, Eng white sandalwood, white sanders. White sandalwood, as it relatives, is a small tree, 20-30’ high, found mainly in India. It has oval leaves and small white flowers. The wood was used in cookery for its fragrance instead of aromatics, burned as incense and was drunk in infusions. The oil has been used to treat various diseases, as it is an astringent, disinfectant, expectorant, diuretic and stimulant. It is prescribed especially for bronchitis, inflammations, reducing fever and cleansing the blood.

The Anón Al-Andalus provides a recipe for an electuary of red sandalwood made with rosewater, sugar, bamboo shoots and rosewater. The author maintains that it reduced fever cause be jaundice, cut thirst, fortifies the liver, stomach and other organs. Further, after distilling the wood, it was used in soap, incense, candles, and potpourri, the odor, of which, lasts for years. See Idrisi, Al-.

Physically, this tree looks like an oak. It has oval leaves, small flowers and a fruit similar to the cherry. The wood is brownish-yellow and when burnt it emits an excellent odor and has been used as incense.

It was so lauded by Al-Andalus poets that they used it as a metaphor as did Ibn ‘Ammar (1031-1086), the Sevillan governor, who flattered Muhammad Ibn Abbad, Poet King of Seville (1039-1095) by saying ‘No other perfume is necessary while you are referred to as the sandalwood that makes the brassier of my mind ardent.’ The tree is a native of the Indian coasts but obviously took root in Spain as Abu l-Jayr al-Isbili, 11th C Sevillian agronomist, author of Kitab al –Filaha (Book of Agriculture) states in the “nisba,”the section on the origin of trees that his sandalwood tree lived 150 years.

On the Maldives Islands, in the Indian Ocean, now the Republic of Maldives, the oil was used frequently as an aromatic ointment referred to by Ibn Battuta (1304-1368), from Tangier, in his accounts of his travels, now in book form titled: "Rihla - My Travels." Spain imported the tree and made its own perfumes and oils from it and the roots from which they extracted yellow aromatic oil.

According to Al-Idrisi, it was used with black nightshade juice or butcher’s broom to raise the spirits and with rosewater it is efficacious against heat. It was applied as a calming antiseptic for fatigue, diarrhea, nausea, respiratory problems, a mild astringent for oily skin and it softened dry skin. It was blended with benzoin, black pepper, cypress, frankincense, jasmine, lemon, myrrh, and ylang-ylang for these purposes. In England, it was a basic ingredient for Saracen sauce (definitely from Arab influence) and used in other sauces and desserts for coloring and as a spice.

The Anón Al-Andalus provides a recipe for an electuary of red sandalwood made with rosewater and  sugar. The author maintains that it reduced fever cause be jaundice, cut thirst, fortifies the liver, stomach and other organs. Further, after distilling the wood, it was used in soap, incense, candles, and potpourri, the odor, of which, lasts for years. See Idrisi, Al-.

the Feast Day of St. Peter, June 29, marking the beginning of the harvest season. It continues to be a great festival. St Peter, originally a fisherman, was one of the 12 disciples of Jesus Christ, who supposedly died on that day. He is known as the founder of the Roman Catholic Church and the first Bishop or Pope of Rome. It is also the feast of St. Paul. Traditionally, fish is eaten on this feast day as both St. Peter and St. Paul were fishermen.

2 lbs sardines, red mullet or other[1] 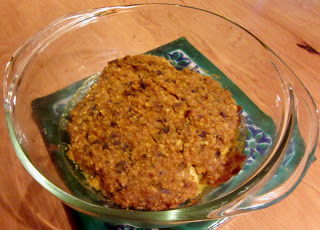 Scale and slice the fish. Dip it in boiling water. Remove imediately. Wash in cold water.

Put it in a frying pan. Pour vinegar with dissolved saffron, cinnamon, spikenard, galingale and a little mastic, citron leaves and chopped prunes soaked in vinegar over it.

Sprinkle this with chopped almonds and garlic cloves wrapped in sprigs of thyme. Pour plenty of oil over this.

Put in a moderate oven and leave until the sauce is dries up and the top is browned. Turn off oven and let it sit about 20 minutes before serving.

OCast soma, Eng. bran, wheat bran, branny outer layer of wheat. It is the coarsest outer layer of the husk covering wheat, barley, or other grains, which is separated from the flour after milling.

In the Middle Ages, the bran was removed before cooking the grain. The method for doing this is explained in Nola’s recipe for groats.

In Al-Andalus, it was used to make couscous grains. Further north, in the days of Juan Ruíz, bran bread was one of the few foods shepherds took to the mountains with them while watching over their flocks. Too it was a grain fed to livestock to fatten them up for the slaughter. Further, it was squeezed into bath water to relieve insect bites.Wheat and other brans are consumed today for their dietary fiber, which prevent constipation or relieve chronic constipation.

OCast. salua, MEng asay, Eng. 1. assay or tasting of food and drink for poisons performed by an official of the household, a very important ceremony to insure that the food and drink is not poisoned, performed to save the king or lord of the household. It indicated the high social standing of the lord and was symbolic of the act of eating. The head steward or wine steward tasted the liquids. In Spanish it is called “el beso,” the kiss. After the steward approved the item, it is served to his master. 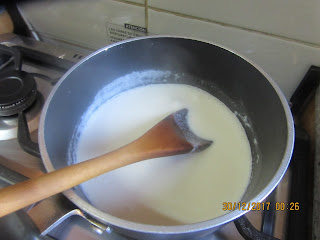 OCast sulcitras, Eng gravy boats; earthenware or metal sauceboats, a concave recipients for sauces in any of various shapes. [Sánchez-Albornoz. 2000:146]
Posted by Suey at 9:00 AM 0 comments

Sugar, salt and pepper were used in many dishes in winter. In summer acid fruit juices, like lemon, bitter pomegranate and orange, were added. Many sauces were named for the herb or spice used such as pepper, ginger and cumin.